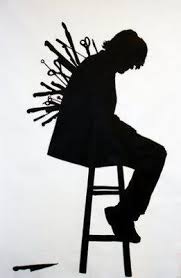 Apart from an slutty reputation as a teen virgin,  I do not recall any individual or intimate betrayals. That is not to say there weren’t any, it just means I wasn’t aware of them, or it was not hurtful enough for me to record and recall in the long term.  All my boyfriends, and certainly my husbands (ironically) including my abuser, were faithful. Again to my knowledge. So I did not suffer through any painful, personally directed, treachery.  Fortunately for me, disloyalty from others, has not been a significant part of my experience, at least until I joined an outreach that preached loyalty.

Even so, that one incident of betrayal alone would haunt me for years, and take me decades to fully process through to forgiveness. I cannot even begin to express what being falsely accused feels like, when it is coupled with the assassination of your character. But I can tell you, I would not even wish that level of back-stabbing pain on a rival. Although many would not bounce back from such a horrific display of public shame, it would end up serving me quite well in the long run. Exactly how much so was to be revealed in time, long after the nightmares faded and I recovered from wounds that got quite infected, before I was able to fully heal.

Given that the Illuminati seems to attract more than their fair share of the lunatic fringe, it is no wonder this outreach would be a breeding ground for folks with ulterior motives. I have learned that far too many who join, do not fundamentally understand what this movement is all about, nor the kind of people the Illuminati seek in order to help them accomplish their utopian Globalist Agenda. Not that I blame them, The Illuminati has not yet drawn a definitive line in the sand that states specifically what they  are looking for, so we are left to read the signs and symbols, and between the lines. Something not all of us are proficient in. Something the nefarious among us could care less about, and the astute already understand.

Since I am the highest ranking Citizen Member Initiate, and currently the only one to enjoy this distinction, there is no pattern for others to look to. It is only me, a seemingly random human going through a horrific, and public learning curve in leadership development, to look up to.  Hardly an example to most, unless one takes the interest to look past the role itself, and to the person who has been honored to inhabit it. But most never do that. They are too busy coveting what I have, to see V at all. Of the scant few that do see my heart, even less than that -place any value on it. Then there are those who chose to see me as evil incarnate. To them, I am on par with the greats like Charles Manson and Hitler. Despite the Illuminati’s unwavering support, these people continue to see me as selfish, and as diabolical as they come. Something that hearkens back to my teens with a crystal clear, soul shattering echo.

To say I have experienced some betrayal since I have been with this outreach is a colossal understatement. Rather, I have actually been clinically traumatized by an endless stream of those willing to stab me in the back, to further their own agendas. Much of the traitorous behavior I have experienced is a matter of public record. But certainly not all of it. Once the Portal reopens, those who are new to this movement will surely run smack dab into the great lengths folks I once trusted went to, in order to shame and humiliate me. Each with their own reasons, which do not even matter right now, much less in 5 or 10 years. But the pain, oh my gosh, the freaking pain of being falsely accused, and betrayed by those I actually trusted, was (is) agonizing.

While some of it was understandably expected due to the nature of my role, there were things that occurred ‘in secret’ that greatly exacerbated an already mortifying situation. Things that damn near killed me. And I do mean that quite literally. What most saw on the surface hid something far worse, something far more devilish slithered beneath the veneer.  Something I cannot share. Something that I still cannot even talk about anyway, without sobbing. I was betrayed on a level so profound, it could be considered professional grade. Even now, after the threat has been removed, I am struggling to heal. Thankfully, I do not walk alone, or I would have likely ran for my life from this outreach, and never looked back.

Betrayal is an act that underscores the importance of loyalty, a central value of The Illuminati. To betray someones trust, is precisely the opposite of showing them loyalty. It is disloyalty to be exact. Those that believe human treachery has a place in The Illuminati, do not know or understand this organization, at all. IAM has been VERY clear, disloyalty is not tolerated on any level within their ranks. So I would imagine that those Initiates who demonstrate they are not trustworthy towards others, will never see the Light that dawns inside their illustrious pyramid. It is vitally important to the operational structure of this organization, and certainly their outreach, to chose only men and women of honor, to participate. If you can not find a way to live up to these standards, you will never be counted as one of them.

It is essential to the progress of our the New World Order that we are trustworthy. Treaties are never honored by traitors. Thus we must be ever mindful of the moral significance of loyalty, in all its forms. We must never allow ourselves to turn on those, who seek the same Light we do. There is nothing humanitarian in that. There is nothing kind or virtuous in betrayal. Even if you have been disloyal to someone or something in the past beloved Beacons, you can change you behavior immediately. You can vow to never again behave in that manner TODAY. You can redeem the damage by no longer causing anymore of it, and making amends where necessary.

Take heart in the fact that The Illuminati is certainly able to tell the difference between a really bad misstep, and the habitual sidestepping of the treacherous. So please do not lose hope, if you are feeling as if past mistakes will keep you from advancing in this outreach. Remember, part of being ‘Illuminati’, is the continual quest to become better versions of ourselves. We can chose at any time to leave that which no longer serves us in the dust of the new trails we blaze~